When last I left former NASA astronaut Leland Melvin in the fall of 2018, he had been raving about Zorro, a Rhodesian Ridgeback puppy he adopted through Rhodesian Ridgeback Rescue, Inc. on Jan. 18, 2018. He fell in love with the puppy after flying to Boston and driving to Cape Cod to meet puppies just born from a rescued mother dog. After a strong connection, he chose Zorro.

The adorable puppy was adopted about four years after Melvin lost his beloved rescue dogs Jake and Scout who died nine months apart in 2014. They’d become instant celebrities when they were featured in Melvin’s official NASA photograph.

Melvin has seen a lot in his life thus far. He’s been to space, of course, and is also an engineer, educator, speaker, dog rescue advocate, a storyteller for National Geographic channel’s “One Strange Rock,” and currently, a co-host of Science Channel’s “Truth Behind the Moon Landing.” Oh, and he’s a former NFL player! 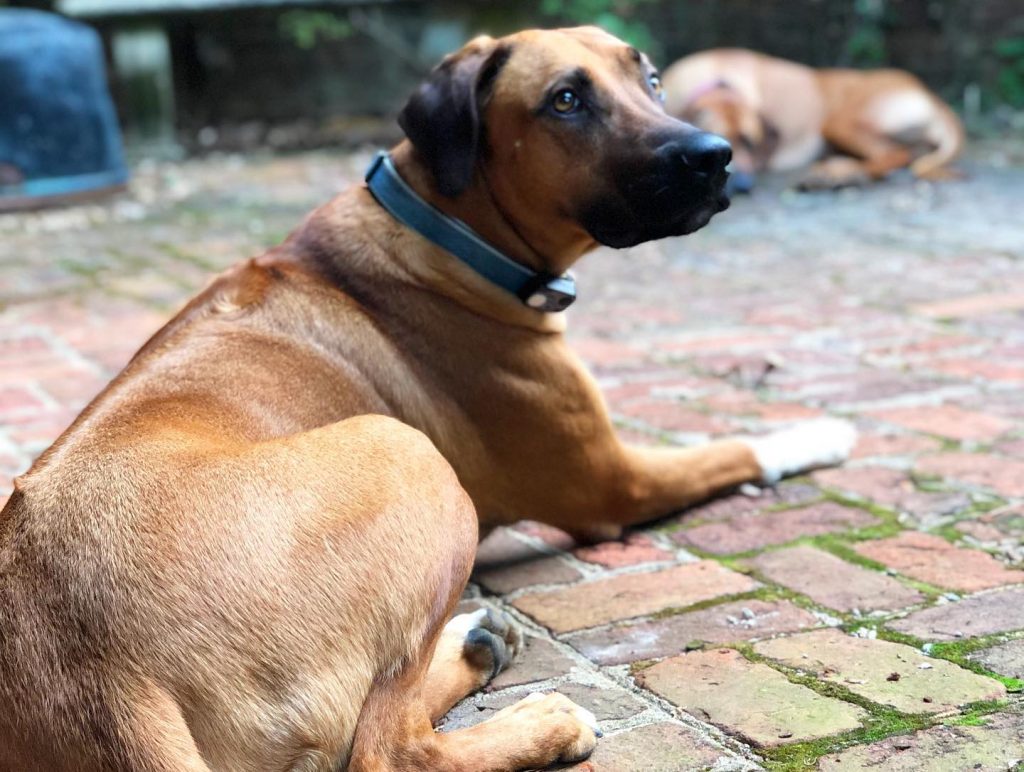 Yes, Melvin’s resume is stellar. Yet none of that could prepare him for Zorro who proved to be quite the adorable character, from eating rocks in the fireplace, eating socks (and throwing them up), chowing down on deer poop. Melvin found himself constantly cleaning up the yard so that Zorro couldn’t get to it.

Another Rescue Puppy Joins the Fam

After Zorro turned one, Melvin decided it was time to bring another dog into the family. “I went back to the Rhodesian Ridgeback Rescue and they told me there was a dog in North Carolina,” Melvin said.

Her name was Roux. She was a year old and was a former puppy mill dog with a tough start in life. Melvin brought Zorro along to the foster family’s home. “After the greetings and the butt-sniffing they formed this little pack and started running through the yard and it was a most beautiful thing,” Melvin said. “I knew they were destined to be together.” 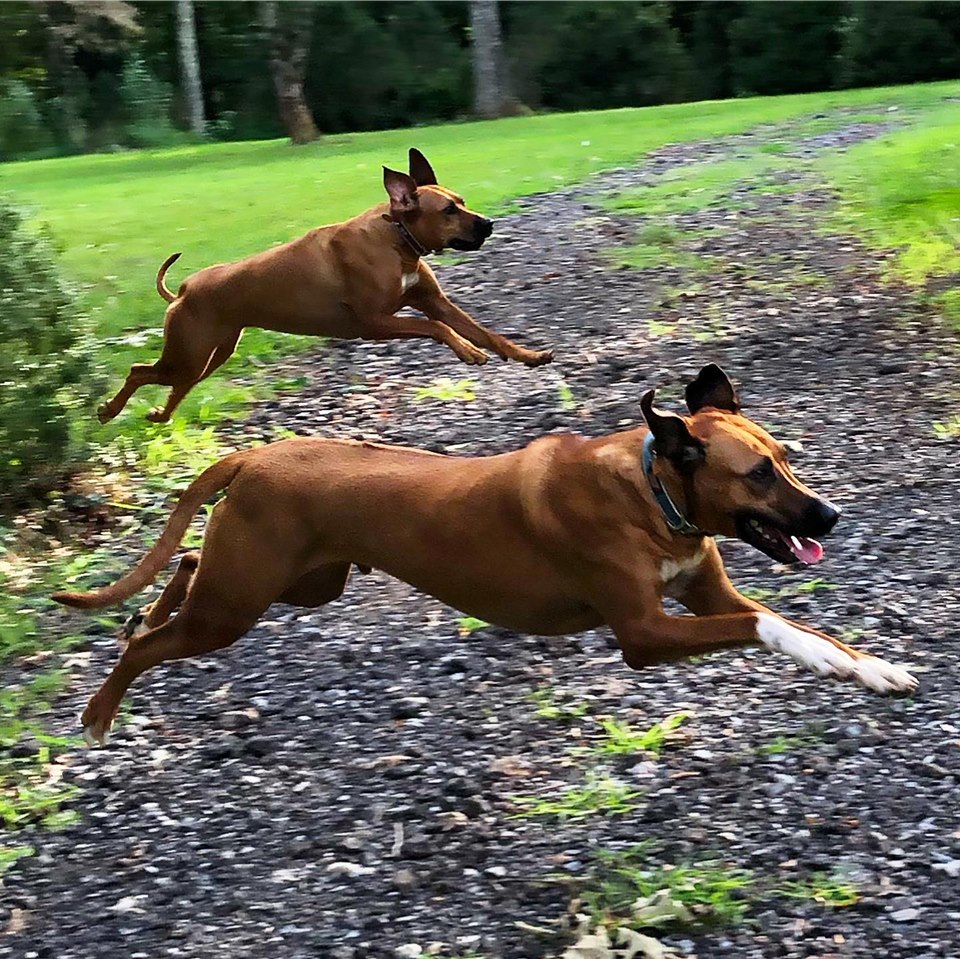 On the ride back home to Virginia, Roux got car sick and threw up. “[I thought] what did I get myself into?” Melvin said. “But they bonded right away and it showed me that no matter if it’s a person or dog throwing up, we can all learn to accept and be around and care for each other. And the dogs are so inseparable now.”

When Roux first arrived, she was a bit unsettled and nervous. In addition to being fearful and unsure, she chewed everything in sight. But now she and Zorro only chew the toys from their toy bin, and Roux has adjusted to a routine, which has helped a lot.

From the beginning, Melvin noticed that Roux was one smart dog. “I remember that she picked up on the doggy door right away after seeing Zorro use it,” he said.

Immediately Zorro had a desire to show Roux who’s boss. “Zorro would go over and roll over her and start biting her neck, grab her collar, and then pull her around,” Melvin said. “That lasted about an hour. She was trying to get her bearings, got up, and then pinned him down. She put her mouth around his neck and started squeezing.

“Zorro started yelping and he couldn’t get up. Then everyone knew who was running things,” Melvin laughed. 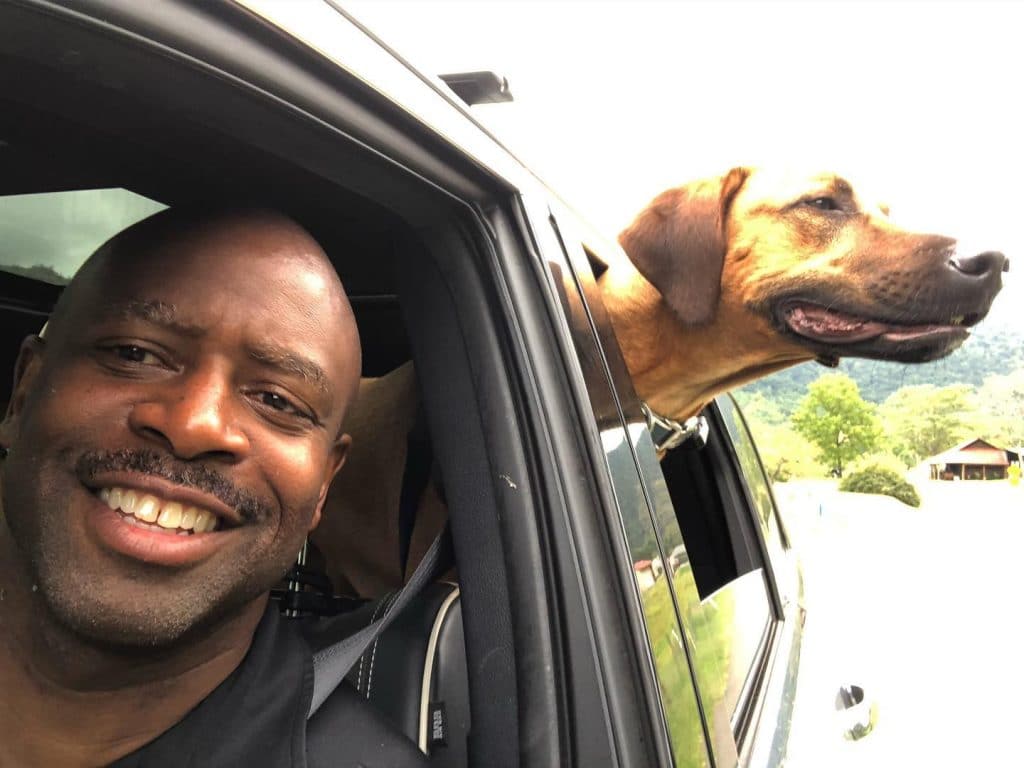 Although Zorro continues to do the same things, he understands that Roux can snap him, if she wanted to, of course. “It’s as if Roux is saying, ‘I’m going to let you do your thing, but you know I can take you,’” Melvin said.

Being outside brings more adventure for these two fun-loving and competitive dogs. They love to run.

“Sometimes they stare each other down and then run toward each other and do chest bumps,” Melvin said. “They then take off and run. It’s so powerful and beautiful to watch.” 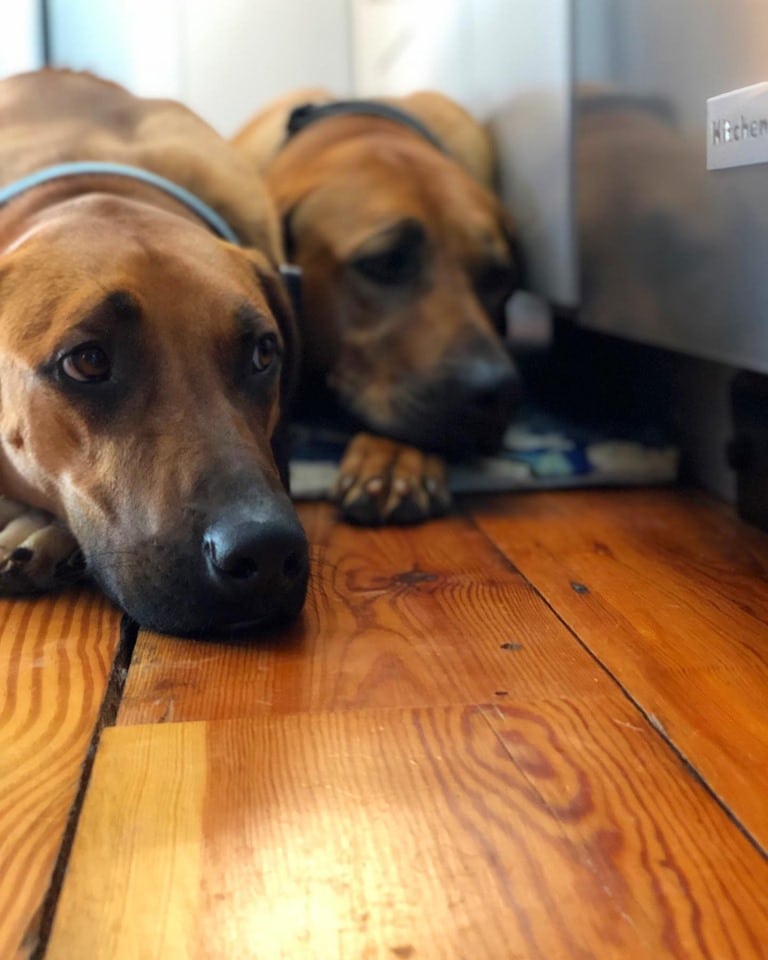 Roux and Zorro keep on doing their thing. They love to sit in Melvin’s four-wheel-drive utility vehicle while he drives around. “And they love to lie together and hold paws and watch the geese,” he said.

“I travel a lot and previously when I left Zorro at Shady Mountain Pet Retreat, I felt so guilty,” Melvin said. “So, now having them together at the resort is just fantastic.”

While Roux and Zorro get along and love to be together, Melvin constantly has to watch them, especially when it comes to a certain rug in the living room that the dogs used to play on.

“I’ll never forget, Central Virginia Home magazine was coming to do a photoshoot of the house,” Melvin said. “The evening before the shoot the dogs decided to play on the rug as hard as they could and basically they used their claws and shredded it.”

But now they don’t play on that rug anymore. They each have dog beds throughout the house, and they have the basement and the yard to use as play areas. Melvin has to keep an eye on Roux especially because in the yard she tries to chase deer and could easily jump the fence.

Although Roux and Zorro are each their own dog and have distinct personalities, Melvin said he can always feel the presence of Jake and Scout.

“Everything that happens with Zorro and Roux, I feel they are channeling the legacy of Jake and Scout,” Melvin said. “They are on a mission together to bring peace and goodwill and love through animals.”

Dogs On a Mission

Melvin is working on building a camper van so that he can bring Roux and Zorro to his appearances and speaking engagements. When the van is complete, Melvin’s plan includes road trips around the country with the dogs who will help promote literacy and dog advocacy. The plan is to visit local humane societies, libraries, and local boys’ and girls’ clubs.

“You have to spread literacy,” Melvin said. “So many kids and families don’t have books in their homes. When you do, you are better educated and better connected to the universe. I want to help try to bring that to light.

“It’s important to have awareness, access, and opportunities to take you to the next level. It’s a trifecta of change. Young kids don’t know what’s possible. Those three things can also transform dogs’ lives, so I think that’s really important.” 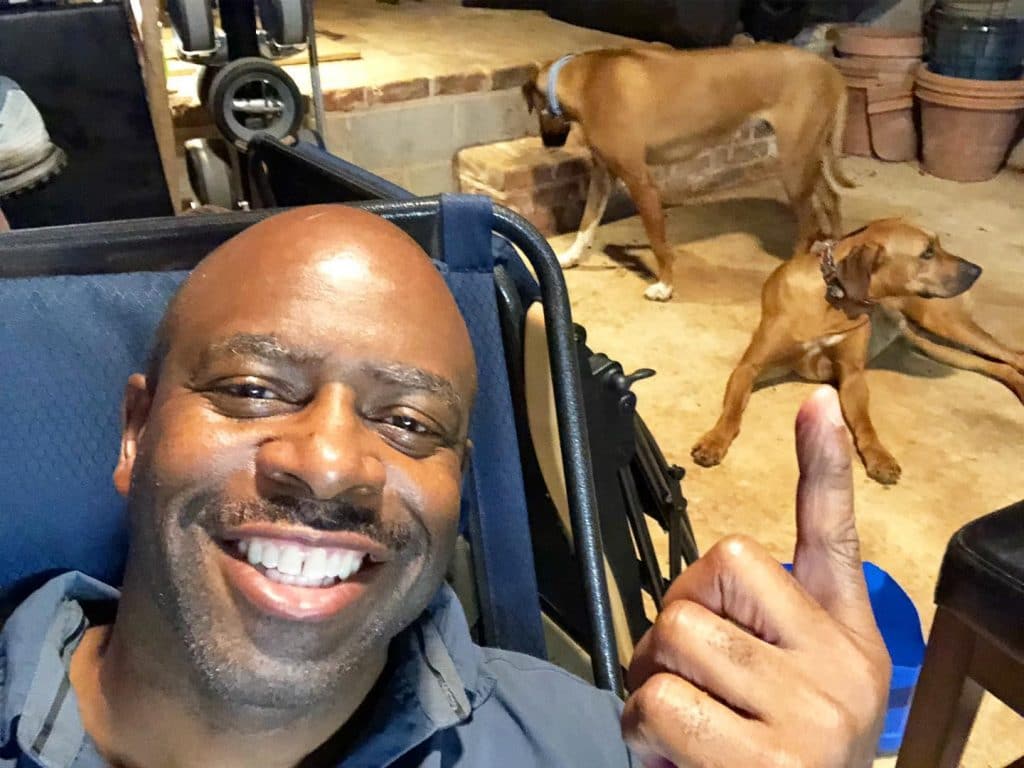 All four dogs, Roux and Zorro and Jake and Scout, are ambassadors for pet rescue, according to Melvin.

“Roux and Zorro have made me more accepting and responsible,” Melvin said. “Every day has some type of simple pleasure associated with the love of my two rescue pups.”

Referring to the wise words of author Dean Koontz, Melvin said, “It makes us better when we bring an animal into our lives because we get so much and grow from the experience. We get inspired by it, and we help change this animal’s life and in turn, they change our life.” 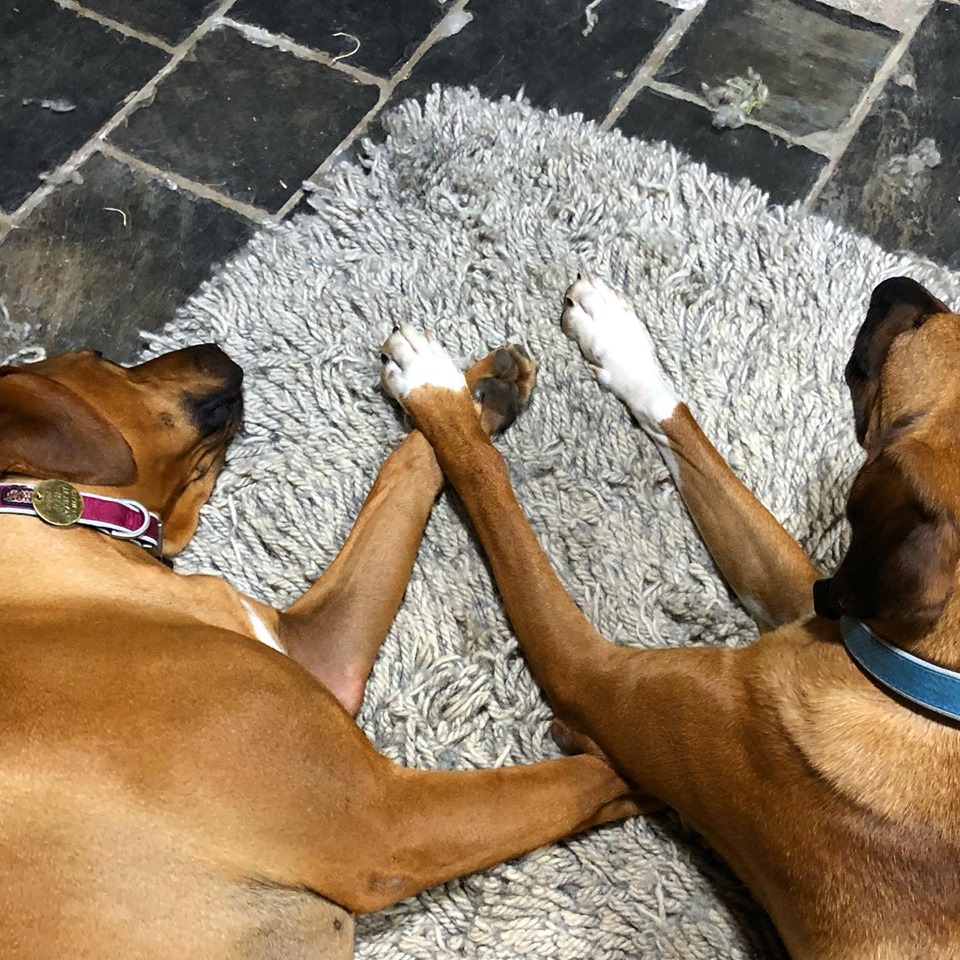 Melvin is working on his next book, a follow up to Chasing Space: An Astronaut’s Story of Grit, Grace, and Second Chances. The new book will include Roux and Zorro as well as Jake and Scout.