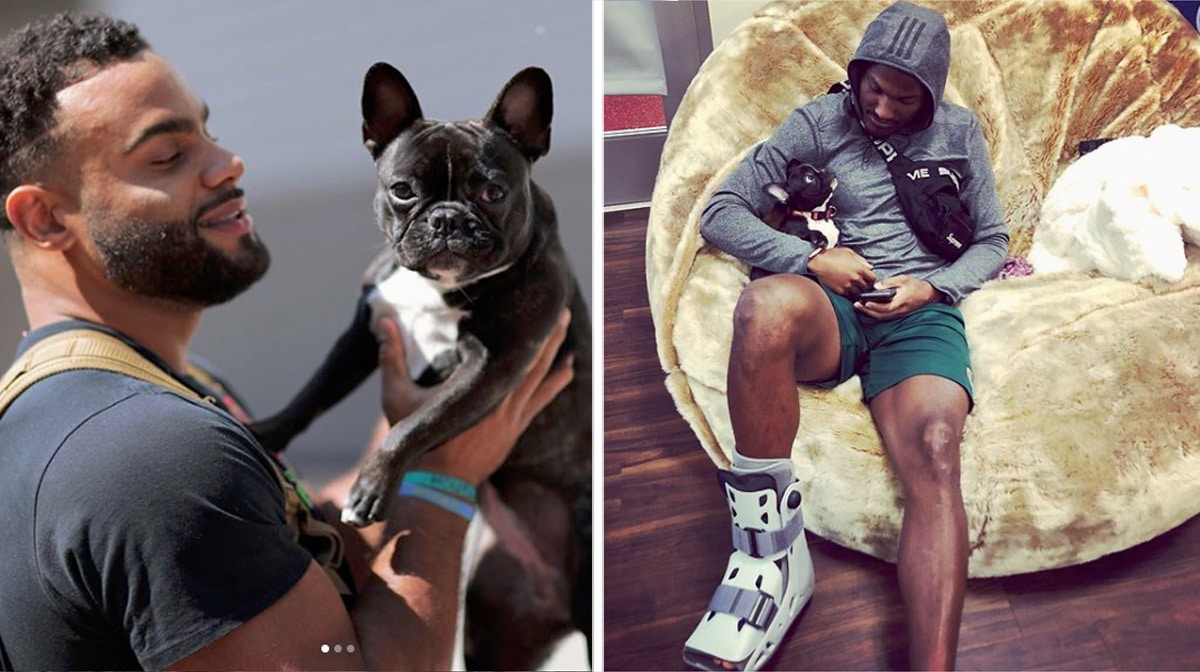 Watch out football fans, the 49ers have a secret weapon in their clubhouse this season who is helping players focus, relax, and lower their stress levels and blood pressure. Who is this magical emotional wellness coach? She’s a dog of course! This mental wellness powerhouse is a 1-year-old brindle and white French bulldog named Zoë. And she takes her job very seriously.

Zoë’s dad is the 49er’s director of player engagement, Austin Moss. While Austin is busy supporting players at every stage of their career, providing access to training and resources for health and wellness, continuing education, and financial planning, Zoë is always available in the clubhouse for a good snuggle, life-giving nap, or just a game of fetch with the players.

Dog owners can attest that just a few minutes of snuggle time or play can turn your mood around in just minutes. The health benefits of dog ownership are well-documented. Having Zoë ‘on staff’ to work her puppy mojo on players can turn a bad day around or help a player relax so they can focus at practice time.

General manager John Lynch tells The Athletic “Every time I went by [Moss’ office], there were more and more players in there, and that’s a good thing,” Lynch said. “I mean, football is so all-in, to have a place for them to go and kind of unplug, that was a good thing. So I think I finally told our owner after a month. I said, ‘Hey, we kind of have this dog now and the guys really like it.’”

“We kind of have this dog now and the guys really like it.”

Player Solomon Thomas was instrumental in Austin bringing Zoë into the fold. After the tragic loss of his sister and best friend, he fell hard for a Frenchie  in the office, from the same breeder as Zoë. When a new litter became available, Solomon convinced Austin she would be an asset to the team and convinced his teammates to chip in and buy her as an unofficial team mascot.

What’s next for Zoë? Getting professional training as a therapy dog so she can accompany players to events at schools and hospitals.

Congrats to the 49ers on their awesome advocate Austin Moss and being committed to player mental health. How cool would it be if every NFL team had a support dog?

The Best 12 Dog Toothpastes for Clean Teeth and Healthy Gums
On the Pandemic Frontlines, the Family Veterinarian Soldiers On
Chasing Down the Best Kitten Toys for Your Little Beastie
The Best Cat Food Low in Phosphorus: Slowing Kidney Disease in Your Cat
6 Things You Need When You Go On A Hike With Your Dog